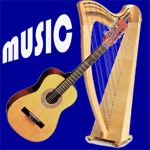 Complete audio and lyrics for all of Aislinn's albums. Also includes appearance dates and travel info.

The Life of Aislinn the Bard

Aislinn the Bard holds a Bachelor of Music Performance in Classical guitar. She has written over 100 songs and composed a song cycle for classical guitar and voice based on Anne McCaffrey's Pern series. Currently she plays at various venues in the Seattle area. Below is a brief description, artwork, and sample song from each of her currently available recordings.

(The Wind Is) A Game Played By Two

Released in 1990, this album was Aislinn's celebration of flight, past, present and future. Here you'll find the story of Beryl Markham, Aislinn's song for the Challenger astronauts, and her celebration of the Voyager flight around the world.

This recording started life as a commemorative album celebrating a gathering of service providers who work with disabled students in colleges across the country. It features several pieces by the blind Irish harper Turlough O'Carolan, as well as original arrangements and compositions by Aislinn.

Day of Jubilee, released in 2010, is a collection of songs whose topics range from the plight of the homeless to the future of space flight. The album also includes two guitar instrumentals.

Lord of the Dance

Dance in the Light

This recording was made in a single evening in 1996. The songs are presented in exactly the order in which they were originally recorded. The combination of its recording technique and the simplicity of the arrangements gives this recording an immediacy unusual in this day of large productions and enhanced sound

This album, devoted to two classic science fantasy series, contains Anne's first ever classical guitar song cycle, the Teaching Songs of Pern. We have enbedded YouTube links to some of the songs, but the audio for the remainder remains unavailable.