Each October, the Puget Sound chapter of Sisters in Crime hosts its annual flash story meeting, at which anyone who wishes may read an ultra-short story. Here are my 2013 efforts.

A sample short story of a more conventional length. 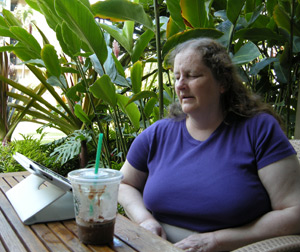 I used to think of a writer as someone who toiled away at a typewriter with a thesaurus by her side and a cup of coffee near to hand. I imagined a lonely life full of rejection and angst, replete with a generous dose of depression and despair. Who can blame me? After all, that’s what we hear about when we’re not hearing about the millions that the test-selling authors make.

But then came e-mail. And filk. And my discovery that I could, in fact, write short pithy little reviews and the occasional op-ed column. This was all followed by the realization that writing wasn’t about being great, it was about embracing language in all its diverse forms. Below are just a few of the things I’ve done.

Beginning in 1996 I worked as an instrumental music reviewer for the Victory Review, a local acoustic music journal. I continued with them for about nine months. I also wrote a piece for a magazine called Communications Quarterly describing the beauty of Morse Code which I titled “Morse Code: New Places for an Old Art?.”

Of course, the greatest share of my short non-fiction these days consists of all the copy on this site, my husband’s site, and my teaching site. The quirk that makes it possible for me to write short has caused me to love writing for Web sites.

I have been writing songs for over 30 years. A majority of my lyrics, along with audio files, can be found at the Aislinn the Bard Web site.

Though I enjoy songwriting, most of my lyrics aren’t very suited to commercial use. I write about such topics as aviation, economics, religion, and science fiction—not necessarily topics of general interest. My most recent song, about the Dreamliner even may have offended people. But my songs enjoy some renown in science fiction fandom.

Discover the insanity that is writing a 50,000 word novel in 30 days. I mean, I used to look at my friends who did this and seriously question their sanity. Now it’s like another holiday during the year. First there’s my birthday. Then there’s Halloween. Then the very next day it’s time to start writing again. It has gotten to be such a habit that I can’t sleep in November unless I’ve met my word count or am at least caught up. And, yes, I graph my progress in an Excel worksheet. So click on the link and read my synopses. Click on the logo and get the real deal.